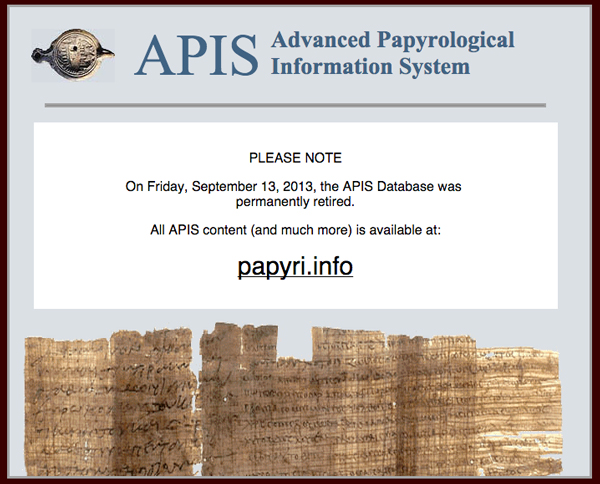 ADVANCED PAPYROLOGICAL INFORMATION SYSTEM retired in 2013. The information in its database can now be found at papyri.info (see below). For information about the former project, see:
http://papyri.info/docs/apis

ARABIC PAPYROLOGY DATABASE offers a comprehensive collection of published texts in the Arabic language on papyrus and parchment. This collection from Egypt goes up to the 16th c. A.D. It includes information about the papyrus or parchment, a searchable text, and images. Links entered on 1 January 2015​
http://orientw.uzh.ch:8080/apd
http://orientw.uzh.ch:8080/apd/asearch
﻿Search APD﻿ 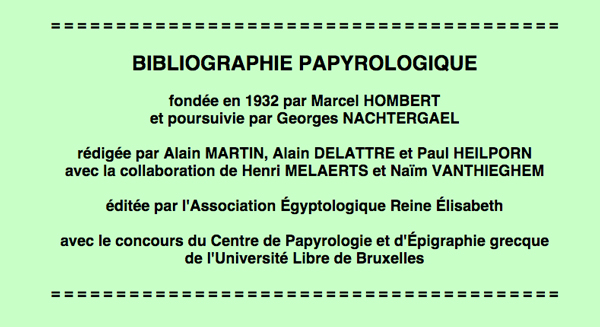 BIBLIOGRAPHIE PAPYROLOGIQUE offers a bibliography of published articles about papyrus. It is available through purchase as both a hardcopy and electronic version. The information is now available for free at papyri.info (see below) under the Bibliography tab. Links entered on 1 January 2015​
http://www.ulb.ac.be/philo/cpeg/bp

CHECKLIST OF GREEK, LATIN, DEMOTIC, AND COPTIC PAPYRI, OSTRACA AND TABLETS is a catalog of published editions of Greek papyri. The hardcopy version was released in several editions, beginning in 1974; the online version was last updated in 2011. Link entered on 1 January 2015
http://library.duke.edu/rubenstein/clist

HEIDELBERGER GESAMTVERZEICHNIS DER GRIECHISCHEN PAPYRUSURKUNDEN ÄGYPTENS (HGV) is a databank of published papyrus texts from Egypt. It offers a catalogue of editions, a list of Greek and Latin words and names, and information about each papyrus. This information is linked to Trismegistos (see below), where the edited text can be found. Links entered on 1 January 2015​
http://www.rzuser.uni-heidelberg.de
http://147.142.225.241/Hauptregister/
﻿Search HGV﻿

LEUVEN HOMEPAGE OF PAPYRUS COLLECTIONS (LHPC) lists all papyrus collections worldwide, with addresses, descriptions of the collection, URL, and links to the individual texts in each collection. This comprehensive databank links directly to TRISMEGISTOS (see below). Links entered on 1 January 2015​
http://www2.arts.kuleuven.be
http://www.trismegistos.org/tm/search
﻿Search LHPC﻿
PAPYRI.INFO is a conglomerate of online papyrus collections, including DDbDP and the now-defunct APIS. Its database includes Greek, Coptic, and Arabic papyri, as well as other languages. It was created and is maintained in close conjunction with Trismegistos (see below). It not only serves as a portal and search engine for papyrus facsimiles, editions, and other papyrus resources, but also is used to edit papyri. Links entered on 1 January 2015​
http://papyri.info
http://papyri.info/search
﻿Search papyri.info (PN)﻿ 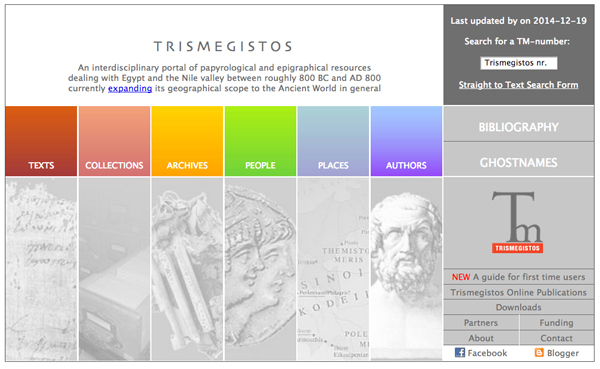